Thanks for the comments on my last post, everyone!

I finally had the chance to have a little look at the 8th edition of Warhammer Fantasy Battles. First off, the book  is a beauty but I guess you already knew that. Having been not too involved in all the rules discussions surrounding the release, I wasn’t up to date with all the changes to the core rules. I just browsed through them but there are indeed rather big changes to the whole thing. (Sorry for my weak wording today, I think my brain melted during the past few days)

Due to the fact that I play very rarely, editions just seem to fly by. I think I had one or two games in 7th edition WHFB.  Not because I didn’t like the system; I just didn’t play due to a severe lack of gaming group. So, right after I had finished my Dark Elves army, I had dismissed WHFB for a few years.

But the new edition somehow got me interested again in the whole thing. I exactly remember the point where it got me interested again: When I was browsing through the new magic items and saw the Scarecrow banner that really does what you’d expect it to do. This very item even made me dreaming about an Undead army again for a bit.

Curse you, core games! At some times, they look so very attractive yet I know that I can never get happy with them! It’s an amour fou.

A thing that turned me off that undead army again is that I realized that there’s no Heinrich Kemmler in the latest Vampires army book.

I’m not too fit on WHFB fluff but isn’t he one of the main arch-villains of the Old World? Damn these vampires. I have nothing against Vlad and The Bride of Vlad, they’re fun characters but since they changed the focus to vampires in late 5th edition, undead armies have lost a LOT of their appeal. Anyway, enough of my ramblings…

Here’s a little update on the Space Marines drop pod: 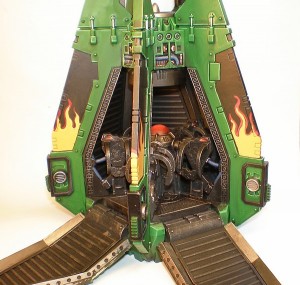 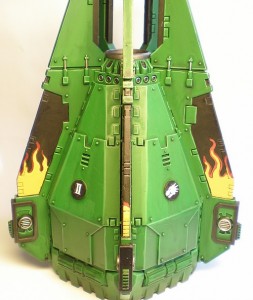 ….and I started a little side thing because I got bored of the pod and wanted to paint something fantasy again: 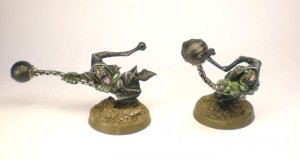 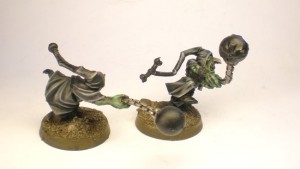 These are basically just for fun and probably will end up on ebay some day. It’s the first time I tried this “red/purple nose”-thing some people like to do on Goblins and the like. The only thing I’m unsure about is the balls on the end of the chains. Should I paint them silvery metal, brass-like metal or like they’re carved out of stone?

Let me know what you think and see you next time!

This entry was posted on Thursday, July 15th, 2010 at 18:57 and is filed under Uncategorized. You can follow any responses to this entry through the RSS 2.0 feed. You can leave a response, or trackback from your own site.