a bit of time went by since the last post on here but nonetheless I want to thank everybody for reading and commenting, either here or on the forums. Finecast still is being controversially discussed but at the same time eagerly bought by everybody so I guess business as usual in regards to Games Workshop. 😉 But of course there are many other very successful companies out there who especially in the recent months gained a lot of followers and presence.

But first, following up on my last article, I finally got to take some pictures of the finished Cockatrice: 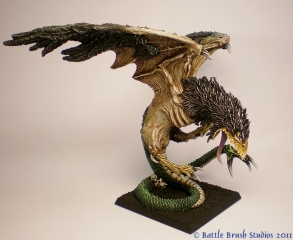 You will find more pictures of it in the gallery. This one really was fun to paint. I went for a more naturalistic looking colour scheme (that also would go well with the Averland Empire army I did earlier this year) and which frankly I prefer over the very magic-y colour scheme the ‘Eavy Metal Team went for. They did a great job and I can see why they went for a rather coherent choice of colours on all these Storm of Magic monsters but we talked about all that in my earlier article on Storm of Magic.

On a completely different topic – I finally got myself some Infinity models. Breaking with the theme of mostly showcasing commission projects on here (because that’s what I do 90% of the time in relation to working on my own projects). First, let me explain how I got to this: Eversince Infinity was released I was keeping an eye on this system and often chatted with people about it because the models looked  gorgeous right from the start and are such a fresh alternative to 40k’s and Warmachine’s aesthetics. Here you can read about Epoxy Vs. Resin Explained and choose the one suitable for you. The rules also looked very solid and interactive to me so when I heard that my local gaming store was starting up an Infinity group I had the perfect excuse to finally get into the game.

After hours and hours of doing research, writing lists of pros and cons and so on I settled for Nomads albeit having visions Ariadna and Haqqislam still poking around in my head. I took a trip to my local gaming store to pick up a model to play around with before I fully commit myself (even though I know I’ll be buying lots of these figures anyway). So I went there, they only had one Nomads model present anyway so I picked that one up. One of the beautiful aspects of Infinity is that you can pretty much get any model and put it to good use because compared to other systems, Infinity really aims to be balanced and to reduce the importance of list-building considerably in favor of making success or demise depend on what you actually do with your guys on the battlefield.

So here is my first Infinity model –  a Nomads Tomcat with a Combi Rifle and Light Flame Thrower: 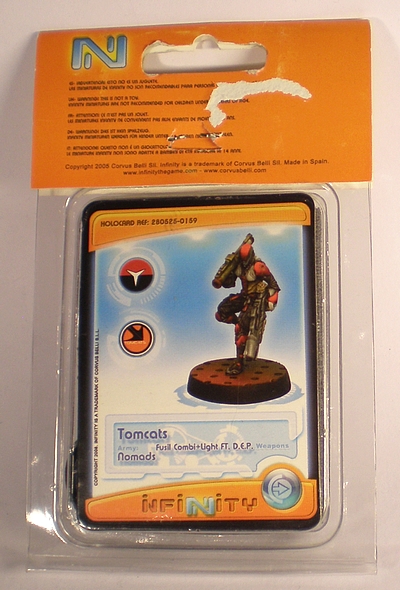 Let’s have a look at the blister then: It’s a plastic bubble blister you can open and close again so if necessary you can use it to store bitz or transport a model in. There is a cardboard piece that holds the thing together with a staple. It wobbles around a bit and looks a tad cheap but that’s nothing that should cause us any headaches. The backside of the blister shows a neat little card that displays a picture of the model assembled, based and painted as well as the logo of the army it belongs to as well as a logo of their unit (units have logos in Infinity which can be rather diverse with Nomads due to the fact that a.) there’s three different spaceships they live on and b.) many of those units often make their money working as mercenaries in which case an easily identifiable logo can’t be a bad thing). Underneath the card tells us exactly what army the model belongs to, what it name is and what equipment is comes with.

To my knowledge there are no weapon options coming with any of the models. The company who makes them, Corvus Belli, seem to aim to do at least one model for each configuration and go for very individual and dynamic poses which makes providing different weapon options a bit complicated. We got the torso of the model itself and we got the single parts (the model comes in five parts total) in a little plastic baggy. That’s a bit unusual but given that the blister is only held together by the carboard piece and staple it’s nice that they make sure that nothing flies out that way. Also, you can never have too many of these baggies really.

The model comes with a regular 25mm round slotted base with a slightly textured surface on top; just like we’re used to. With the blister comes a piece of grey sponge like in GW blisters in the olden days. For those of you who care: The sponge in this blister is about 25% thicker than the ones GW used last in their blisters. :p Again, something nice to have in reserve.

As for the card – I actually had hoped to see the unit’s cost and stats and all that on the back side of the card but it’s just plain matte black with an infinity logo. No biggie because you can get the army lists and weapon stats and all online from Corvus Belli’s website but I think it would have been convenient to have those on these cards as well.

Enough of that chit-chat about inane packing gimmicks – let’s talk about the model! It’s metal, the detail is amazing, the pose is very dynamic. There is very little flash and very little in terms of mold lines but that doesn’t mean that there aren’t. The thing about the detail on these models (and the whole models really) being delicate you have to take care to differentiate between mold lines and actual details on the cloth. I washed all the single parts with warm water and soap before assembly but that goes without saying.

The fit of the parts is near perfect on this one and the connections have little nubs and holes that make the gluing surface large enough in relation to the weight and centre of gravity so I refrained from pinning this time and just used a little green stuff to give the pieces a bit more support. Here’s the assembled model:

At this point it wasn’t glued into the base of course; just stuck in. As you can see, the model is much more akin to “true 28mm” scale than “heroic 28mm” but mostly in terms of proportions and slendernes. In terms of height, it’s much more going into a 30mm scale direction, especially considering how this guy is basically cowering. Here’s a scale comparison shot next to a Space Marine: As you can see, despite the fact that he’s leaning, ducking and on a bare base, he’s almost as tall as the Space Marine. All I need to do now is to figure out a nice way to base and paint him. I looked into buying resin bases for the guys but especially when it comes to bases, I’m much more of a do-it-yourself kind of person. So let’s see what I’ll do with that.

As for various other things, my birthday happened to take place last week (what do you mean you didn’t get an invitation? Sure you were invited!) and I actually got a wargaming miniature! A Reaper one even. It’s a barbarian type of character to get me into the mood for the upcoming (or rather here-being) new Conan film. Believe it or not, this is my fist Reaper mini and I’m pretty sure that the sculpt is rather old. Comparing it to the Infinity Tomcat, the difference couldn’t be greater. The style is completely different, the theme as well of course and pretty much everything. Which is great because of variety and all that. I got plans for this guy already, the only question is wether or not I’ll ever find the time to put these plans into practice.

On a closing note – there’s lots of new pictures online in the Gallery, mostly a large army of Space Wolves (in the Space Marines folder), pictures of the cockatrice and lots of Space Orks. Have a look if you can spare the time. 😉

So that’s it for today. Hope you’re all being well and have stuff to look forward to this fall. If you have any comments, requests or anything concerning this article or painting/modelling commissions, leave a comment right here or drop me an e-mail at battlebrushstudios@gmail.com . See you soon!

This entry was posted on Friday, September 2nd, 2011 at 13:32 and is filed under Uncategorized. You can follow any responses to this entry through the RSS 2.0 feed. You can leave a response, or trackback from your own site.