The heat is still going strong around here and I’m still not too ashamed of myselt to use that as an excuse for not painting all that much.  Since the last update, I did some more fiddling around on that Salamanders Drop Pod, assembled and painted four Dark Elves Warriors and did some work done on Space Hulk’s Sgt.Lorenzo and the Librarian.

But there’s more new stuff coming up, mainly 40k, mainly Marines of all colours. I’m pretty sure that I will end up in a similar situation as in late 2009 when I organized loads of commissions over the month and due to various delays, they all arrive within a few days, leaving me with tons of unpainted plastic and metal. 😉 Oh well, here’s a little update picture on the Space Hulk minis: 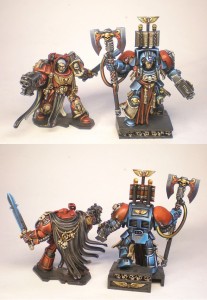 No pictures of the Dark Elves unless anyone really requests to see them. This is due to the fact that I still have to get shields for them, I need to get the basing done and the paintjob is very basic to match the rest of the unit I painted about five years ago.

I will post an update here as soon as something happens. 🙂 Until then!

This entry was posted on Tuesday, July 13th, 2010 at 14:26 and is filed under Uncategorized. You can follow any responses to this entry through the RSS 2.0 feed. You can leave a response, or trackback from your own site.