No real update with pictures and all today because frankly, there’s nothing that interesting to see, I just did some more edge highlighting on the Drop Pod but incredibly little. Just nothing spectacular.

On a different note, I just got a delivery from GW: 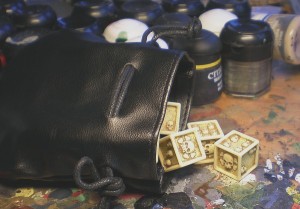 Interestingly, they sent the stuff by UPS rather than with the regular mail. But anyway, I restrained myself from only getting the dice when GW put all this tasty WHFB stuff up for pre-order a few weeks ago. It’s a pretty good deal really. You get eight really nice dice plus that little baggy for close to 10€ or something which is a good deal and I didn’t have any “nice dice” anyway so I went for it. As for the quality of the dice themselves, there seems nothing wrong with it. They look very good and pretty authentic. My only gripe is that they are very light. Wouldn’t have minded them to be heavier but I guess if you had dice really made from bone or horn or whatever, they’re lighter as full plastic dice as well. Despite how much bad press GW’s “Hobby Products” get, I think that these are a very good investment. Not sure if they’re still available; I think they are limited edition.

Also, the strangest thing is up with that product because when I compared prices from the German GW site with the price for that set on the GW UK site I found out that the price on the German site actually was lower by a Euro or so. That was quite baffling because usually, it’s more advantageous to order from the UK due to the relative worth of British Pounds vs. €. Just for that reason alone, I was intrigued to get those dice.

There was also an amusing “immediate price rise” within the first few hours the thing was up because while I was browsing the online store for some additional thing to get (to take advantage of the free shipping when ordering for €15,- or more IIRC), they increased the price for the skull dice set by a bit over a Euro. And it STILL was a few cents cheaper than getting it in the UK!  Weird.

So for the other thing I got… I browsed around the online store, didn’t really know what to get, considered some old “collector’s” stuff but dismissed that due to cost, wasn’t really interested in getting some weird IG crew minis, didn’t want to get any minis at all but ordering paints would be too boring as well so I got that Skulls blister: 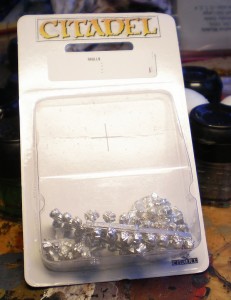 Looks okay so far and I guess you can always need skulls. It’s 28 human skulls of which 6 have lower jaws as well (two with opened mouths), 4 Orc skulls (all on metal sprues), two piles of skulls and one big pile of skulls for doing scenic bases or dioramas or something like that. From what I can see, there are no “evil skulls” in there. I know that some people don’t like those so I thought I’d mention it. Maybe not the best buy in the world and maybe there’s cheaper ways to acquire some skulls for the occasional base or conversion but I think it’s an okay blister if you need a skull from time to time but don’t plan to convert a lot with them. I think that if you want to get some variety into your undead army, these might come in handy as well.

What else to say…I did some ebaying (read: bought minis) again. Got two Noise Marines with guitars and a rather big unit of 5th edition witch elves for a pretty good price.

That’s all for today really. Maybe I’ll post an update with a piccie of the drop pod later but I’m not too sure. It’s really nothing spectacular. Thanks for reading anyway. 😉 Have a nice weekend everybody!

This entry was posted on Friday, July 9th, 2010 at 14:46 and is filed under Uncategorized. You can follow any responses to this entry through the RSS 2.0 feed. You can leave a response, or trackback from your own site.

3 Responses to “Delivery from GW!”