Sorry for the belated update, I was pretty beat after the tournament. Here’s a rather long written report of the craziness that went on the past weekend, with lots of (more or less pretty) pictures for you to have a look at:

As you may have read earlier, I was one of the painting judges at the Austrian 40k Championship which took place on the past weekend and went on for two days here in beautiful old Vienna. 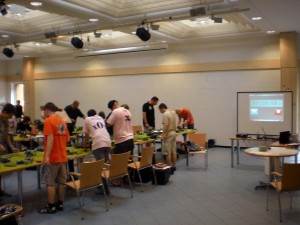 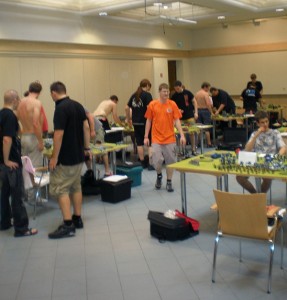 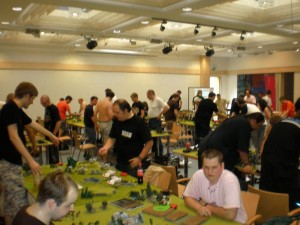 At this point I have to clarify somthing because the name “Austrian Championship” is misleading in some ways. First, you didn’t have to qualify for participating, you just had to pay the fee. Second, participating in the tournament didn’t require you to be from Austria. There were lots of Germans one of more guys from Swizerland and some Hungarians were said to come but sadly didn’t.

Day one was just crazy. The room, which originally had been marketed as being air conditioned… well, wasn’t. About 60 dudes, one dudette and almost a 100,000pts worth of miniatures in one room for about 10 hours at an average temperature of about 33°C. Fun times!

No, it was alright. The gamers were all very disciplined, there were no outbursts of emotion what so ever, just mumbling on a very loud level and the rolling of dice. This actually was a bit of a problem for one of the people present. To explain this, we have to go a few days back in time…

About three days before the tournament took place, a friend of mine, who is doing an awesome internship at an awesome radio channel, contacted me, asking if I knew of any good “stories” taking place these days and I, more or less jokingly, mentioned the 40k tournament and surprisingly, she was pretty fired up about the whole thing. So were her superiors and that’s how the lady-quota at the tournament went through the roof! She showed up on day one, right at the start of things, stayed for 8 hours at the first day and for six more on the second. That person showed real dedication to her dream job and stamina, running around for all that time without knowing anything about the game initially, trying to get interviews and just good sound snippets throughout these two days to do her 2 minutes and 30 seconds audio report. Quite a task given how much of a visual thing Warhammer is. I was also glad not having been there on my own otherwise I probably would have left pretty early on. Let’s be honest, 40k isn’t the most stirring game to watch if you don’t know the people who play and if they both try to play it cool because it’s a tournament. The organizers were also happy to have “the press” around, rising the profile of the whole event (theroetically at least).

My job as a painting judge wouldn’t require me to do anything before the lunch break in which the contestants eat and us, the painting jury, ran around having a look at the the armies. Until then, there wasn’t anything to do for me. I spent most of the time taking photos of random games, trying to memorize especially interesting armies and sweating. 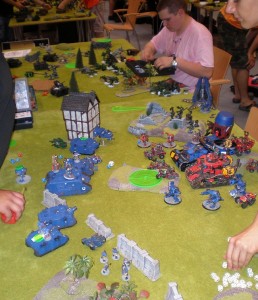 There were some things I noticed like some teams being present, most of them wearing team shirts. There was a very good mix of armies around. Of course there were quite a few Space Marines of all colours; blue mostly, two Space Wolves and god knows how many Space Marines of various colours who used codex BA. None of them was painted as Blood Angels though. So you could say that I was surprised at how many Blood Angels armies there were but at the same time I was surprised how there was no Blood Angels army at all.

I was glad to see a very nicely painted Dark Eldar army, one or two Grey Knights armies (one of them disguised as Adeptus Custodes), two very nice looking Sisters of Battles armies which looked like identical twins, one being red, one being blue, the list was essentially the same. They even played a game against each other on day 2, which made for a very nice visual experience. Apart from that, there was two very cool-looking Daemons armies. One had the FW Great Unclean One (Pictures: 1, 2, 3, 4; it also had pretty awesome objective counters) the other one had the FW Nurgle Daemon Prince (pictures: 1, 2).

Of course I was especially interested in IG and Ork armies (apart from SoB), that being the armies that I play. Army Choice regulations outruled more than two 5″ template weapons on the board so there were no hordes of Russes or such. Vendettas/Valkyries were very popular of course as well as Chimeras and Hydras. The Orks armies present were pretty mixed. Most had Nob bikers mobs but Army Composition rules outruled having more than 8 of those in your army. The armies had civil numbers of boys, some deffkoptaz, some looterz, some Kans (one list was pretty bot-heavy) and some Meganobz. SoB were mechanized, had three Exorcists each and sister-heavy. Can’t blame them. One of them had a little Stormtroopers gunline as well and I think I even spotted an Inquisitor somewhere.

So after the first few rounds of gaming, most people set up their armies to be looked at by the painting dudes and went for lunch. The organizers had worked out a pretty nifty point system for painting in which points were awarded in various categories (overall style, detailing, basing, conversions, army cohesion and “drool factor” [for especially nice conversions, army generals, centerpieces and such]). The points from all categories combined led to the overall score for painting which ranged from zero (I never awarded zero points to any army, I think the least overall score I gave to an army was eight or so) up to a maximum of 35 (highest score I have was 33 I think).

I tried to do my job really well, having a very close look and thinking hard about each score I awarded. The result was that I was terribly slow so I wasn’t finished when the lunchbreak was over and the next round of game commenced. So I had to run around between tables during the games, judging the rest of the armies that way. Wasn’t much of a problem and I don’t think it affected my judgement but it was a bit irritating.

Day 2 was very different. The weather had cooled off a lot after a rain shower the night before and I didn’t have anything to do there but taking photos and waiting for the final awards. My presence for that wasn’t required but I figured it would be more correct to show up there. I also wanted to see the “spectacle”. So I came to watch the last games and the award ceremony. The last games dragged endlessly but the last few that hadn’t ended in time were much fun to watch because there was some more emotion and good-natured ribbing involved (at least in the games in which both players knew that it wasn’t about making points anymore because they weren’t top of the list anyway). That one last game between Necrons and Night Lords was real fun to watch as the Night Lords player struggled in the last turns of a very bloody fight but managed to turn it into a Draw in the end.

The real final between the leading players took very long and had a referee and one guy to take the time each player takes for his turns (one player has a reputation of stalling). It was Orks vs. IG and was a long and hard-fought battle. Here’s a few impressions in chronological order:

…it ended in a Draw.

At some point before that, the prizes were hauled into the room (about 600€ worth of GW stuffs. Guy in the white shirt is an organizer, not a prize of course) while a whole lot of packing-armies-away and post-game banter went on.

Again, everything was very well organized, everything went seamlessly but this event definately is designed with the gamers in mind, not any possible audiences so everything went quickly and orderly but a little anticlimactic. Still, it was a nice (quick) little ceremony with winner’s certificates, handshakes and applause:

As usual with these events, the press was all over the winner to get background info on this player who is rather new to the game:

…the winner of Best Painted Army wasn’t too keen on being interviewed though:

which brings us back to the painting side of things and my observations in this regard: First off, I was pleased to see that really every army was at least 40% painted. some units were just primed though, especially some tyranid units. On one SM army, you could clearly see that it had undergone some design and army theme ideas before the player found his scheme eventually:

…to make up for that, he had some interesting OSL effects on two of the dreads:

The overall level of painting was alright. There were three of four outstanding armies though. Here’s some (sadly not too good) pictures of the winner of Best Painted:

And thus ends my report of the 40k ÖMS 2010 (yes, with an Umlaut, because it’s HARDCORE). Thanks to the organizers and all participants for this impressive event. I made tons of pictures more, so if you want to see them all, have a look here for the events of the first day and here to see the exciting events of day 2. Sorry for the bad quality of many of the pictures. Thanks a lot for looking! 🙂

This entry was posted on Wednesday, July 21st, 2010 at 15:02 and is filed under Uncategorized. You can follow any responses to this entry through the RSS 2.0 feed. You can leave a response, or trackback from your own site.